When you are at rock bottom, friendless and no longer trusted by anyone, i suppose begging to be noticed comes naturally, but tonight our ‘Invasion’ buddies lost their minds completely.

If you didn’t know, Miss Scruffy and Mark replayed a video of of Mac_music openly threatening to cut both Mark’s and his Mum’s throats on cam. Now me personally, i think it was just an attempt to get their attention, although not the smartest way of doing it and quite rightly he has been banned.

For Tom, Ryan and Shez, this was their opportunity to have one last attempt at getting Soultrain and Boo banned again, comparing what was obviously nothing more than a piss taking picture, to someone saying they are gonna come to your home and slit your throats….jesus wept!

Anyway, lets see how their complaint’s had an effect: 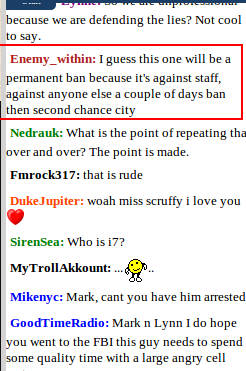 …..Still no effect as yet, ok, i’ll bring it up again, someone’s gonna listen to me ain’t they:

Still nothing, i know, lets get Ryan to have a go, i mean everyone listen’s to Ryan:

Wait a minute, Tom said a 2 day ban, then Ryan pops up with it was a week ban?

Nope, Tom say’s it was definitely a 2 day ban, by this point they realised that nobody was listening to their ranting, so it was time to up the ante and send Ryan in, taking no prisoners in the process:

With mission  ‘Soultrain and Boo banned’ rapidly becoming a failure, they turn their attention to Shawnio:

Even that flopped quicker than Pele’s cock, so with the realisation that their crocodile tears interest nobody at all, off to bed they went.

And everybody laughed happily ever after 🙂

One Thought to “Cry Me A River…”