You know when you just sense all is not well in a situation, but you aren’t sure just what it is?

Well, seems there is quite a bit of lovers tiffs going around the casting groups at the moment. For weeks now, i’ve noticed CKA Ryan has well and truly distanced himself from the original ‘Invasion’ crew, then we had Tom (Enema_within) appearing in casts again on Vaughn, yet always in a different cast to Shez and NorthernMonkey.

Not too strange normally, but don’t forget, these dudes never left each others sides, where one casted, they all appeared. So on went the weeks, then you had Shezzer and Dicky literally sucking anyone’s c*ck on LDR, desperate to get their claws into that channel, so much so, it was nothing short of embarrassing at times. But the biggest clue something was amiss was this little snippet from last night: 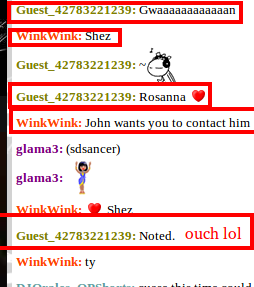 Ouch indeed lol. Ok, first off, these two used to Skype and ring/txt each other literally every day of the week, so if John wanted Shez to contact him, just ring him, no? The biggest giveaway is Shezzer’s reply…noted! lol, you couldn’t have made it more clear you ain’t happy with him if you said ‘tell the fat f*uck i’d rather be raped by a camel’

Oh dear, looks like poor Freestyleradio1, having shit on all his long time real mates, has just been threw to the kerb by the only few friends he had left.

You know what though, it couldn’t of happened to a nicer person 🙂

One Thought to “I Sense Trouble Up The Mill”