Just days after the hamster/guinea pig debacle, Ricky boy was back with another Yorkshire clanger.
He was with his buddy Shezzer in LDR, when the Dickster began to give us his expertise knowledge of all things R&B and Hip Hop.

Here he was, saying how shite Rick Ross is and how he can’t even rap etc, so, given that Dicky knows his Rap better than all us mere mortals, his request at the bottom is going to be someone like Snoop Dog, or Busta Rhymes, or some other similar successful rapper yeah? 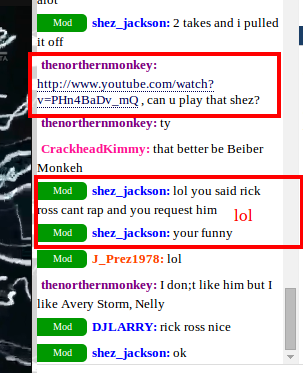 Nooooo, it’s Rick Ross 🙂 Even Shez has started to realise what a total dumbass he’s having to put up with now.
On another note, check the way Shez tries to claim how he struggled to keep his head straight when flying in that Gif lol. What i’ve been noticing lately is Shezzer testing the waters so to speak, with his LDR ‘family’ He will start talking about graphics etc and if somebody replies who even remotely sounds like they know how green screen works, he changes the subject. But if the usual fuckwits are in, he knows they are thick as pig shit, so will try to fill their heads with a load of bullshit, knowing they will lap it up and think he does things nobody else can…hilarious.

One Thought to “Shez Realises It’s Dick By Name, Dick By Nature”